skip to main | skip to sidebar

No, Joy Division was not into Fascism, quite the opposite 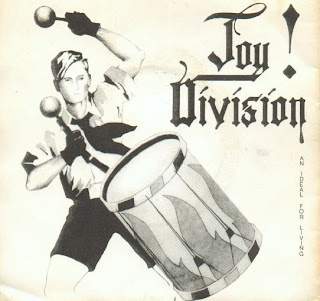 Joy Division was a small band in Manchester from 1976 to 1980 that made music emblematic of a generation of youth coming of age amidst declining social conditions and no political leadership. The Labour government´s betrayal of the working class during the 1970s and the rise of Thatcherism at the end of the 1970s heralded a future of mass unemployment, government repression and decaying industry. The perspective taken by Ian Curtis, the band´s sole lyricist, towards this growing authoritarianism and despair is crucial to understand if one is to place the references to fascism found in the band´s album art in the context intended by the artist, that is, a despairing anti-Nazism.

In an August 2008 article, Kevin Martinez of the Socialist Equality Party (ICFI) explained the band´s relationship with Nazism as such:

The name of the ban 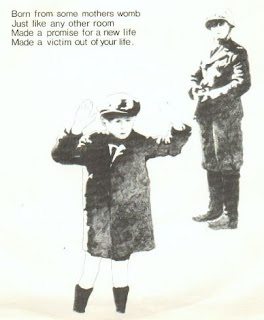 d was taken from the brothels operated by the Nazis in various concentration camps. While Curtis was not flirting with neo-Nazism, some of his bandmates indicate that they had a fascination with fascism at the time, and the whole thing suggests unseriousness and irresponsibility, as well as a growing social nihilism.

The band’s demo EP, “An Ideal For Living,” featured a Hitler Youth member pounding a drum on the cover. The inside artwork is the infamous picture of Jews with their hands up in surrender during the Warsaw Ghetto uprising.

“I like it,” Ian explains “It’s thought-provoking.” This critical stance, however, does not prevent their shows from being overrun by skinheads and accusations of the band supporting fascism.

Punk at that time was a unique music scene in which battles between anti-racists and neo-nazis were being thrashed out at concerts as the skinheads tried to appropriate the punk aesthetic and hijack the following of alienated, disillusioned working class youth who gravitated towards such a sub-culture in places like Manchester at the beginning of the 1980s. This dynamic should have been noted by Martinez when he raised the accusations of fascist sympathies and any presence of skinheads at Joy Division concerts. The lyrics of Ian Curtis made it clear that this was a presence suffered and feared as opposed to tolerated or toyed with by the band. However, there is a claim that some of the other band members had a ¨fascination¨ or ¨obsession¨ or ¨intrigue¨with fascism:

While Hook and Sumner later admitted to being intrigued by fascism at the time, Morris insisted that the group's obsession with Nazi imagery came from a desire to keep memories of the sacrifices of their parents and grandparents during World War II alive. He argued that accusations of neo-Nazi sympathies merely provoked the band "to keep on doing it, because that's the kind of people we are".

Joy Division feared fascism, they did not flirt with it and the artwork and lyrics in An Ideal for Living serves as a warning of growing fascistic tendencies in British society. It appears more like a cancer patient learning the nature of their disease in order fight it. For this, Curtis and his bandmates should be lauded for tackling such a controversial issue and expressing such a well-grounded fear and hostility towards such a veritable enemy of the working class during a swift turn to the right in Britain.

The band´s name is taken from the 1955 novella The House of Dolls written by Ka-tzetnik 135633, probably a young Jewish girl who was captured in Poland when she was fourteen years old and forced into sexual slavery in a Nazi labour camp as part of one of several ¨Joy Divisions¨ created to reward non-jewish inmates and prison guards. For the band to perform as Joy Division should be seen as an indictment of British society at the time. It is not uncommon for young people, coming of age in a time of working class defeat and repression, to loosely throw around charges of Nazism toward their own society. If anything, the correct criticism of Joy Division´s indictment of British society is that it is too alarmist and disappears some important distinctions to validate their despair.

The band´s first recording, An Ideal for Living (1978), mentioned by Martinez because of the album´s Nazi references, contains the track ¨Leaders of Men¨ which thumps out a clear message:

To force a final ultimatum. / Thousand words are spoken loud,/Reach the dumb to fool the crowd. / When you walk down the street, / And the sound's not so sweet, / And you wish you could hide,/Maybe go for a ride,/To some peep show arcade, / Where the future's not made.

Another track from that album, ¨Shadowplay¨ would turn out to be one of the band´s lasting hits. As would be in keeping with Curtis´ lyrical content, the song expressed defeat at the hands of authoritarians:

In the shadowplay, acting out your own death, knowing no more /As the assassins all grouped in four lines, dancing on the floor / And with cold steel, odour on their bodies made a move to connect / But I could only stare in disbelief as the crowds all left

In the autumn of 1978 Joy Division played a precedent-setting concert titled ¨Rock Against Racism¨ which is described in this Guardian article as such:

That influence was both political and musical. 'It built a circuit of gigs and concerts on which a lot of bands cut their teeth,' explains Ian Goodyer. 'And these small gigs relied on the people in the grassroots getting involved.' Such people include Paul Furness, whose RAR club in Leeds staged the only Rock Against Racism concert featuring Joy Division. The strategy of encouraging black and white bands to jam together paved the way for the ska revival, 2-Tone and multi-racial bands such as the Beat (who, according to Red Saunders, first met in Victoria Park) and the Specials.

The release of Closer (1980) showed a band with the same panging need to call out fascism for what it was as the song ¨They Walked in Line¨ indicates:

All dressed in uniforms so fine / They drank and killed to pass the time / Wearing the shame of all their crimes / With measured steps, they walked in line

Here are the young men, the weight on their shoulders

Here are the young men, well where have they been?

We knocked on the doors of Hell's darker chamber

Pushed to the limit, we dragged ourselves in

Watched from the wings as the scenes were replaying

We saw ourselves now as we never had seen

Portrayal of the trauma and degeneration

The sorrows we suffered and never were free

Can't replace the fear, or the thrill of the chase

Each ritual showed up the door for our wanderings

Open then shut, then slammed in our face

Everything is kept inside.

So take a chance and step outside.

So take a chance and step outside.

¨From Safety to Where¨

Just passing through, 'till we reach the next stage.

But just to where, well it's all been arranged.

Just passing through but the break must be made.

Should we move on or stay safely away?

Through childlike ways rebellion and crime,

To reach this point and retreat back again.

All the wheels that have turned,

The memories scarred and the vision is blurred.

Listen to the silence, let it ring on.

We would have a fine time living in the night,

Waiting for our sight.

Guess the dreams always end
They don't rise up, just descend
But I don't care anymore
I've lost the will to want more
I'm not afraid not at all
I watch them all as they fall
But I remember when we were young

Those with habits of waste
Their sense of style and good taste
Of making sure you were right
Hey don't you know you were right?
I'm not afraid anymore
I keep my eyes on the door
But I remember...